The Oregon Electric Railway Historical Society was founded in 1957. The OERHS negotiated a lease of property in Glenwood, Oregon that was the former headquarters of the Consolidated Timber Company and the Gales Creek & Wilson River Railroad. The OERHS laid new tracks and hung catenary wires to turn the property into a Trolley Park, which opened around 1967. This was a secluded, wooded, rural area that wasn’t near any major cities or other tourist attractions.

In 1995, in an effort to have a better location, the OERHS, signed a lease at Antique Powerland, and the Glenwood Trolley Park closed in October, 1995. All of the trolleys and equipment were moved to Brooks and the tracks at Glenwood removed. Trolley operation at Antique Powerland began in 1999. 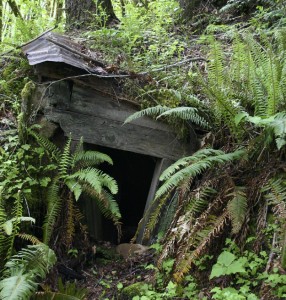 In 1998 Ray Marty and Tim Eyre bought the property with the plans to live on it and to start Camp R&R.

They received their nonprofit status in 1999 and the camp was officially opened. It took several years of hard work to remove the remaining tracks and overhead wiring from the trolleys. The scotch broom had taken over a good part of the property, some of it standing 10’0-12’0 high. They purchased several pieces of heavy equipment, backhoe and bulldozer, to get the job done. The house, which was built in 1982 by Paul Class, has been remodeled and upgraded. The old accountant’s office had been converted into a home sometime in the past and needed some repairs also.

The meadows, which has Gales Creek running beside it, was opened up a little and reseeded, this is where they hold large gatherings, such as family reunions, weddings, and large party’s. Over the years they have remodeled the restroom building, installing drywall, new trims and fixtures. A sports field was added one year, it includes a horseshoe pit, volley ball court/basketball court, and tether ball. Another year a stage was added, the area can seat about 75 people. Numerous parking areas have been added over the years, parking for about 400 people. The newest area is a Airsoft field, it is located at the most western part of the property.